I don't know what it is about grief that turns me to the computer to write. It's like my soul can't contain the feelings of heartache so I have to put it somewhere. I guess some people let go of balloons, or light a candle. I write.

So here I am tonight. Reflecting. Reflecting on the events that transpired on September 11, 2001.

A few months ago I attended a museum in DC with an exhibit highlighting a particular photographer/journalist's experience that day. When the first plane struck the towers he grabbed his camera and headed toward what would later be called "Ground Zero," even though everyone else was running away. He called his wife once or twice to check in with her and report what he was seeing. It wasn't until his camera was recovered from the rubble that the rest of the story unfolded. He continued to stay, to do what had always been his work and passion, he stayed to capture the story. The final footage depicted the tenderness of first responders helping people as well as the horrors of injured people fleeing from the scene and even jumping from the towers. The last picture showed the other tower, struck already by the second plane, with sunlight glistening through the smoke and debris, moments before the tower collapsed.

That was the last thing on his roll of film.

Tonight I think of him and all of the nearly 3,000 people that were killed that day. I think about how each of them had a family, had friends, had loved ones--whose lives would never be the same. They each had a story that ended that day.

I can't help to think about all the loved ones that were left behind. How many people lost their spouse. How many parents lost their children. How many children lost parents.

Trevor said, "it doesn't seem fair," as we gazed across the enormous fountains that have been constructed in the very spot each tower stood. The fountains are deep and water flows from ground level down the dark stone, and then down another level, to what appears to be a bottomless abyss. The fountains are vast, and powerful, and sullen, and sobering.

It doesn't seem fair that all of these people were victims of such a terrible thing.

Tonight, feeling overwhelmingly grateful to have each other, we think about the families whose lives have been forever affected by this tragedy. 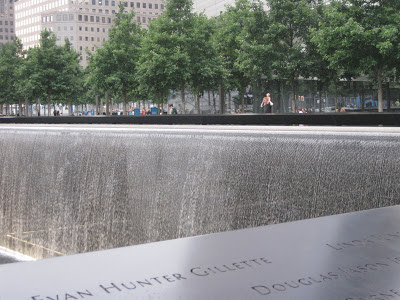 I don't personally know anyone that lost a loved one that day, but I saw their names in the bronze, I gently ran my fingers across the letters of their names, and I thought of them and their loved ones. 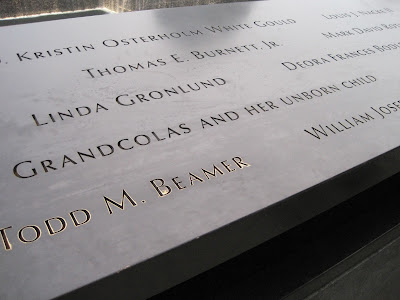 One pamphlet said that the youngest person that died was 2-years-old. This discovery on the memorial informed us otherwise. There was another one I saw that included "...and her unborn child."

My heart is heavy and full of love for these strangers, yet fellow Americans, that have experienced grief and death in the form of a catastrophe that is beyond comprehension.
Email ThisBlogThis!Share to TwitterShare to FacebookShare to Pinterest
Posted by Shelley at 11:15 PM