*****
For anyone that's curious (and mostly for my personal memory and record) here's the lengthy story of how I finally found out.
*****


It was Sunday, March 4 when I anticipated starting my period.

At the beginning of February, I was doubtful and frustrated that I wasn't pregnant yet. I was sure that if it was the plan for Lord to take my son's life because he only needed to come to earth to receive a body, than surely the Lord would send another child soon so that my wants and desires to be a mother could be fulfilled. I had heard of mom's delivering their babies almost exactly a year after they had lost a previous child. That could be me. Surely the Lord would give me that blessing!

Well, to my disappointment and lack of understanding His will - He did not allow that to happen.

At one point I almost wanted to give up. Perhaps if we didn't try to conceive, I wouldn't be disappointed that I wasn't pregnant. I, for once, would actually feel like I was in control. But that was craziness, because not being pregnant wasn't the end result that I truly desired.

I was recently blessed with enlightenment and understanding about faith and truly trusting in God's plan and timing of things (which you can read about here). I had come to grips with the fact that having a family here on earth could take a long time and I was okay with that.

So finally when that anticipated yet dreaded 28th day rolled around I was ready to accept a 'no' for my answer. I had taken a pregnancy test a few days before and it was negative. I was going to let myself believe it this time and not just hope that it was a "false negative."

You can imagine my angst when there was no period. Did I miss count days? Is it just late? Is this happening to try my faith even more?

Feeling really stupid for using my last pregnancy test prematurely, I began texting some friends that I thought might have an extra pregnancy test around. It was Sunday and we don't shop on Sunday, so we weren't about to go to Walmart to get one. No one was replying to my messages. We googled "homemade pregnancy tests" to discover nothing promising, but some people claimed you can put your urine in bleach and it will supposedly fizz if you're pregnant. Before we could try this test, a friend was able to have her husband drop an unused test off at our house.

Trevor and I were in the middle of a weekly planning meeting and I knew I wouldn't be able to focus on it anymore if I took the test. I held out as long as I could, trying to plan our week and talk about our family goals. I had guzzled a ton of water once I found out the test was on it's way and I couldn't wait any longer! 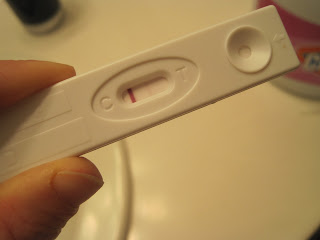 Well...I was left even more mystified than before!! The test appeared to be negative but might have the faintest of lines in the positive area. Could it be? Could I believe it? How could I not get my hopes up?

I decided to try the homemade bleach pregnancy test to see if it would confirm anything. All the bleach proved is that Trevor is pregnant! That is obviously not a reliable test!

We go to bed still unsure if I'm really pregnant or not. I wake up at 4:30 am, anxious and needing to use the restroom! Of course, I quietly sneak out of the house and head straight to Walmart to buy an overpriced test that won't leave me wondering. I guess I don't need to give a play-by-play from here on out because the picture speaks for itself! 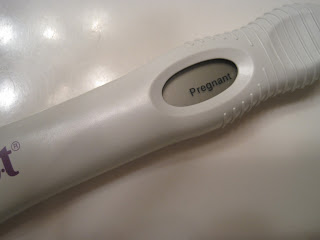 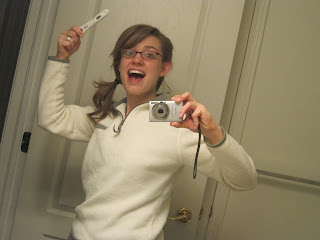 Needless to say I am completely enamored, elated, and excited to be expecting!

My decision to release this information so soon is based on a variety of things which I plan to write about in the near future. But mostly I wanted to be able to continue to write freely about my thoughts and emotions as I experience them. No secrets here...
Email ThisBlogThis!Share to TwitterShare to FacebookShare to Pinterest
Posted by Shelley at 12:58 AM