Finding the Molds of Luke's Hands

I still am a little dumbfounded that the molds of Luke's hands turned up. I just don't even know where to start. 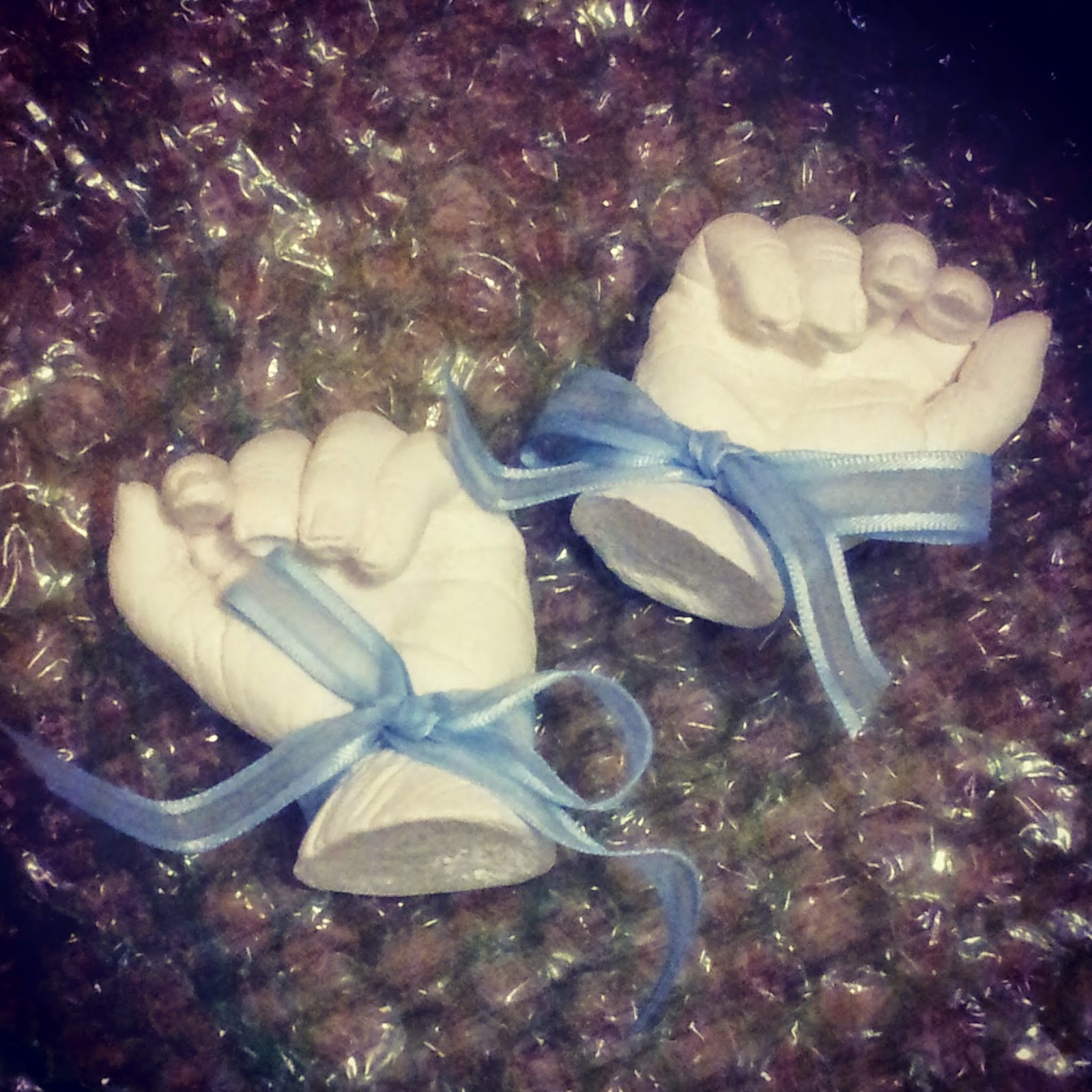 I am not sure if it was my lack of faith that kept me from praying for these to be "returned" to me or if it was the fact that I just accepted them as truly gone and discarded that kept me from asking for their "return." The day after the burglary was garbage day. I had seen it all in my minds-eye: the small but heavy fire-proof safe was hauled off to some dark alley to be pried open and upon discovering it only contained birth certificates, passports, CDs of photos, and molds of a child's hands and because there was nothing of "value" it got quickly dumped and discarded into a trash can which then got hoisted up and dumped in to a garbage truck and hauled off to a landfill. I accepted that story as truth. I had accepted that the molds of my sweet child's hands and the green bubble wrap that was once protecting them were now laying among waste and gone forever.

Back in June I began trying to type about our break-in and all that happened. I couldn't ever finish it. The whole event put me over the edge of levels of anxiety that I could handle and I began to face my depression and mood disorders in the face again. So sitting and thinking about and documenting all that happened and how I felt about was just too much.

So here's a bit of the story. Trying to be responsible tenants we informed our landlord of some strange droppings we were seeing, which turned out to be a sign of termites. The home was to be fumigated. This entails an extensive process of not only evacuating the premise for several days, but also removing or bagging up all of your food (a big deal for me since I have a lot of bulk food). Not to mention packing up everything you need to care for and entertain a toddler with allergies while living out of a motel room that doesn't even have a refrigerator. The whole thing was an added stress I didn't want to be dealing with while I was trying to settle in to life and prepare for a new baby. The climax of the whole episode was definitely the final morning before we could return home when we were informed the house was broken in to while it was vacated.


Here is a summary of when I returned to the house by myself after dropping Jeremy off at a church member's house (whom I just met over the phone the night before!) to discover the state of things and wait for the police officer to return to the scene. I wrote this to my family in an email the evening after it had happened:

[Through the window] I could see stuff had been pulled from our nightstands and from under the bed, but the bedskirt (which I just sewed last week!) was covering the view and the drawers of the nightstand were closed -so I didn't know what was missing. At some point while I was on the phone with Trevor I realized that in my nightstand was a box containing the molds of Luke's hands and my sentimental jewelry that I had carried on my person during the move [from Virginia], but hadn't "unpacked" in to the house yet. This is when I got really angry and too scared to know the truth of if my items were actually gone or not (since I couldn't see in the drawer from outside) . . .

The officer that came was really nice and when we were in the house doing the walk-through I explained to him that I was afraid to look in the drawer to see if that box was gone and told him about Luke and the molds that were made for us. He was quite sympathetic and said that he and his wife had also lost a baby. He offered to look for me, but I got the courage to do it. I was relieved to see the box still there, but my heart sunk again as I opened it and remembered that I had transferred the molds from the box to the safe for "safe-keeping." I sunk to the floor and cried just a little as I peeked under the bed to confirm what I already knew ---the safe was gone.

Re-encountering the Fumigation Company
The timing of this miraculous finding is quite incredible. Friday people from the termite company were scheduled to come inspect our home because Trevor had mentioned to our landlord that there were signs of termites in spite of it being fumigated.  I essentially blame the fumigation company for the break-in because they were not forthright about how common break-ins are with fumigation and did not provide or advise to hire the security needed to keep the premise safe. Since our incident, other homes and complexes that we've seen being fumigated  have had 24 hour surveillance because burglary is so likely with the big tarping over the building declaring to the world that "I'm vacant!" and declaring to criminals "I'm vacant, come and take the stuff inside!"

So Friday afternoon I stood at my sink washing dishes being mad and blaming this company as I waited their arrival. But also thinking about how I needed to get over it and let it be. How long was I going to harbor feelings of hate, frustration, and blame? What was done was done and being upset about it towards some person whom I've never even met, just didn't seem right. Nevertheless I was indeed harboring hurt and resentment and having these people coming back in my home was the last thing I wanted. I don't usually dwell on our break-in but having the people I blame for the whole ordeal to be making an appearance in our home was bringing a lot of not-so-pretty feelings to the surface.

For better or worse, I accidentally had arrived home about 20 minutes after the time they were supposed to come inspect and must have either missed them or didn't hear their knocking while I put two crying babies down for their naps! Regardless of being saved from having to encounter someone from the fumigation company they were on my mind on Friday.


Discovering the Molds
I have yet to finish "Clara's bedroom." So far it has been a combo of bike storage, a guest room, office/craft supply storage, and kind of a "catch-all" kind of space. I was attempting to finish cleaning it up in preparation for family to come and for Clara's transition from our bedroom to her own room. One of the things in that room is a big bin containing almost everything concerning Luke. The molds of Luke's feet are on display in our bedroom and everything else has been stored in this bin since we moved. I starting going through it to organize it a bit.

I opened a small tupperware container within the bin which holds an assortment of items -- sympathy cards, notes from floral arrangements, ultrasound photos, CD of the audio from the funeral service, and other small items. Instantly I felt bitterness as I saw the green bubble wrap that used to protect the little hand and feet molds. I reached out in disgust to pick them up ...and to my shock discovered the little hands were there! Right there in my hands loosely swaddled in the bubble wrap.

I could not believe my eyes. I believe I shouted out to Trevor to tell him what I had just found. I was so in shock I couldn't respond with much emotion other than being completely flabbergasted. I sat on the floor looking down at something I thought I'd never see again, not sure what to believe. What I knew to be truth (the molds were in a landfill somewhere) was not only challenged, but instantly proven wrong.

"I feel like I'm looking at a ghost," I proclaimed. Which I realize is a really strange thing to say regarding something that really does symbolize the deceased. But in a sense these had died too. I think I grieved their loss as well, of course, not in the same way I grieved the loss of my son's life, but I had grieved their loss.


Miracles and Answered Prayers
It is strange to think about how these molds were never really gone. At least not as far as I know. But I am still scratching my head over how they got to where they were found. Did I put them there? I have no recollection of it. And why were they there? They are either on display, in the box where put special things when we move (which we've done a lot in the last 3 years), or in the safe. My mother-in-law keeps reminding me that there's no use in trying to figure it out. It's simply a miracle.

And for this sweet miracle, I am so grateful. Thanks to everyone who prayed for their miraculous return.
Email ThisBlogThis!Share to TwitterShare to FacebookShare to Pinterest
Posted by Shelley at 1:28 AM