Ultrasound Part I: An Unplanned Outing

On Saturday, June 16, we decided to go get an ultrasound and find out the gender of this baby. It was totally unplanned and last minute.

We had spent the morning with Scott and Maryanne's family at the "truck touch" an event with all sorts of cool construction, military, and other vehicles that the kids (and adults) could climb in, on, and over and even honk the horns and press and pull any lever or switch we could get our hands on. After doing some Father's Day shopping at Barnes and Noble Trevor and I had lunch at a little burger place called Boardwalk Burgers in Alexandria.

Toward the end of lunch we had the idea to go have an ultrasound done. I'm not sure whose idea it was. Perhaps I suggested it. Trevor wasn't sure about it, but he looked up a place on his phone to see if it was even a possibility. He gave them a call and, sure enough, they were open! If we left right then we'd be able to make it in time for the last appointment of the day at 4 o'clock. I got a milkshake (something I'd usually avoid consuming during pregnancy) in hopes that the extra sugar would get this little one moving and give us something to see for the ultrasound.

We had a navigation mishap and ended up in the middle of Falls Church when in all actuality the location of the ultrasound office was in Fairfax (about thiry minutes from where we ended up!). We called and they told us they'd stay open for us. What kind souls! And a good thing because by now we were getting pretty excited to know the results!

On our way there I couldn't help thinking about the other angel mommies that I know who had found out at their ultrasounds that something was wrong with their baby and were told that their child would have particular problems or simply wouldn't make it.

What if that was going to be us? Within the hour were we going to find out that our sweet baby has some sort of defect that will prevent us from taking him or her home with us after birth? Were we about to find out that this pregnancy was not going to result in bringing a baby home? I couldn't help but to wonder.

Anticipation, excitement, and concern overwhelmed me.

We concluded that we could handle that sort of news. Nevertheless, Trevor made me pinky-swear that we weren't going to get any bad news that afternoon! As if me pinky-swearing it could change our fate!

Trevor suggested waiting to find out the results. With Luke we had the results sealed in a card that we opened later that evening when it was just the two of us. He suggested it might even be fun to open the results with his family (his parents were even in town).  I didn't want to find out along with everyone else nor did I want to see my baby and not know if it was a boy or a girl. So we decided that I would find out the gender at the appointment and we would seal it in an envelope and Trevor would read the results later when we were with the family.

It was wonderful to see our little baby. It was incredible to see how much our baby had formed and so reassuring to see that our baby looked healthy and normal.

Trevor covered his face so he couldn't see the screen and I covered my face so that if Trevor glanced at me he wouldn't be able to read my expression... 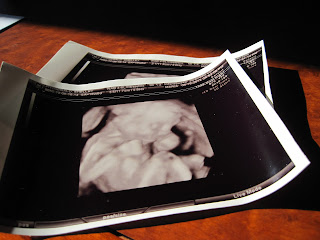 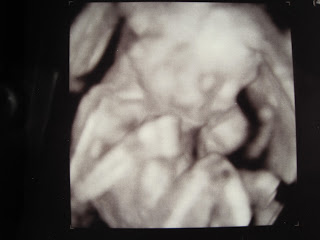 *****
Anyone wish they could see the other picture? You'll just have to wait to see what the second picture tells us about this sweet little baby! Any guesses? If you already know, don't spoil it please! You'll have to check back later to see what the results are. And if you really can't wait and want to try to get it out of me I guess you could try calling, but I have Trevor's phone today.

Email ThisBlogThis!Share to TwitterShare to FacebookShare to Pinterest
Posted by Shelley at 8:46 AM