I'm still trying to document the kind things that other's have done for us. There's a list of these posts under the  "Gift's for Bereaved Parents" tab.
*****

I was so surprised last September when we were in Seattle on our little get-away to spend time with Trevor's parents when I received a text message from my neighbor and friend, Ruth, with this picture and explanation. 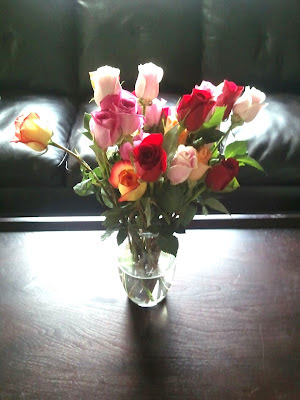 While we were out of town our friend Juliana had sent us an order of beautiful roses. Ruth, found them on our porch and brought them in and put them in water for us until we returned.

I was so touched by this thoughtfulness from a friend who, though we love, we don't spend much time with or talk to very often. I was so incredibly touched that not only was she thinking of us weeks after our loss, but that she made the effort and sacrifice (because I'm sure two dozen roses aren't easily part of a college student's budget) to send us this loving gesture.

To our luck, when Juliana found out we weren't even home she called Flowers.com to have them hold the order. It was too late because they had already been sent. Nevertheless Flowers.com sent us another order of roses. It was so wonderful to have our house filled with such lovely flowers --a sweet reminder of the love that others (particularly Juliana and her husband) have for us.

A short while later I discovered that Juliana had lost her mom to cancer, which I had never known about her. I can only assume that she knew personally the comfort that comes when friends reach out with such kind gestures. I hope that I can be more like Juliana and reach out to others who are suffering even if they aren't my closest friends. What a Christlike example Juliana is of love and compassion. I feel like I have so much to learn from others and their kindness. I hope that I can emulate some of the Christlike attributes that have been demonstrated to me.

Thank you Juliana for the flowers and thoughtful note.

Email ThisBlogThis!Share to TwitterShare to FacebookShare to Pinterest
Posted by Shelley at 12:54 PM